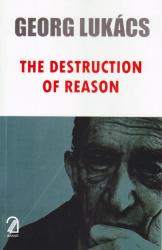 The Destruction of Reason

Georg Lukács makes no bones about calling The Destruction of Reason a polemical book. Completed in 1952, several years after the appearance of Horkheimer’s Eclipse of Reason, it reconsiders the disturbing history of German irrationalism with the investigative tools of historical materialism. Displaying a rare breadth of learning and awareness, Lukács traces the atrocities of Fascism to seeds sown as far back as the older Schelling, Schopenhauer and Nietzsche. Kierkegaard, though not a German, is discussed at length in view of his exceptional influence on twentieth-century thought. In dealing with pre-World War I philosophy and sociology, Lukács speaks from personal acquaintance with leading figures in Germany, notable Georg Simmel and Max Weber. The final chapter, which charts the development of racialist theory from eighteenth-century roots, is followed by a substantial epilogue intended as a warning for our times. Although peculiar historical conditions account for the German susceptibility to irrational trends, no country can be sure of immunity.

Despite the tendencies to obscurantism, complacency, despair or cynicism which Lukács reveals in his chosen thinkers, he does not seek to deny their constructive achievements. His energetic sorting of the intellectual wheat fromt he chaff concludes, typically, on a cautious yet hopeful note. with Pietro Nenni, Lukács recognised in the latter-day international peace movements a first sign that conscious reason in supplanting mass feeling (always open to manipulation) as the guiding ligh of humanity. Long awaited in English-speaking countries, The Destruction of Reason stands with The Young Hegel as one of its author’s cardinal later works, informed throughout with his overriding concern for the future of civilised life.