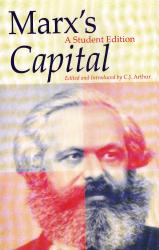 Whatever the state of current politics, Karl Marx remains one of the great thinkers of the modern world. Chris Arthur has solved the problem of slimming down Capital, without tearing the fabric of Marx’s argument or losing the flavour of his style, with exceptional success. All students will have reason to thank him. – E.J. Hobsbawm

Karl Marx’s Capital was first published in 1867, since when it has become the classic text of Marxism for professional economists, social scientists, philosophers, students, and political activists alike. But the sheer extent of Marx’s great work of political economy has often daunted readers, and hampered their understanding of his ideas. No less a person than Harold Wilson jokingly claimed he gave up when he came across a two-page footnote on the first page.

C J Arthur, whose student edition of The German Ideology by Marx and Engels has long proved popular, has substantially edited and abridged Marx’s monumental work, eliminating the more arcane polemics, the scholarly footnotes, statistical data and mathematical formulae. He leaves intact and clarified Marx’s main theoretical arguments and the historical information which supports them.

Marx’s Capital – A Student Edition makes one of the most influential texts of the modern era open and accessible to readers as never before.